As children, nature is a never-ending adventure where you create memories that last a lifetime. As an adult, the magic remains, because is there anything better than watching the next generation learn to love nature?

We think not. Fjällräven friend and family-man Daniel Wilhelmsson agrees. Growing up in the countryside of Värmland, Sweden, being outdoors was just “being”. Encouraged by his parents and grandparents, nature was his playground and he has set out to instil the same appreciation in his own children. 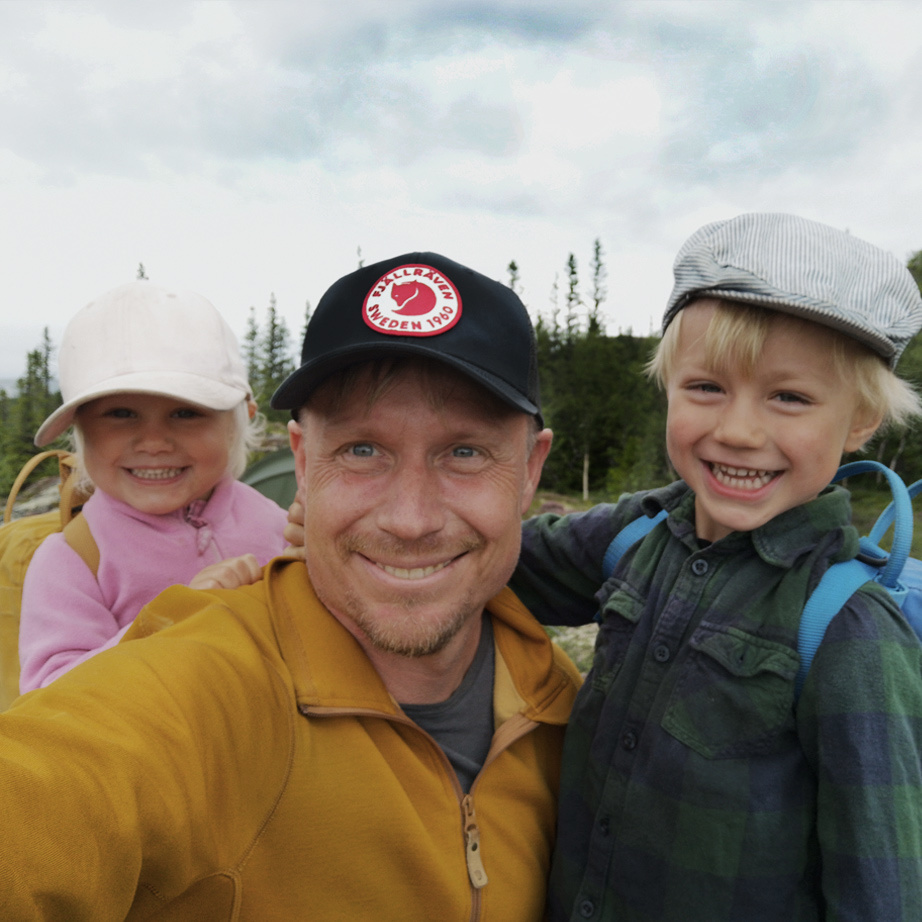 “Nature has a calming effect on us humans, and we all need that contrast against the busy lives many of us lead. I think introducing our children to nature and the outdoors gives them a fundamental sense that being outside is natural. It creates a foundation of respect for the environment.”

Like many Swedish parents, Daniel and his fiancée Sandra have made it a point to share their love of the outdoors with their children as early as possible. And we mean early. Alexander is three, Minna is four, and Alexander’s first time in a tent was at the tender age of five months.

“It was the beginning of fall, with crisp and clear weather. Alexander slept in the carrycot with a sleeping bag on top. As I recall, he slept soundly, though his mother did not. His first sub-zero experience was at age one. Camping with very young children is easier than you might think, because they don’t move around as much.”

For adults embarking on a first trip with young children, Daniel’s stories are more than just amusing anecdotes, so we have collected some of his tips here.

“Outdoor life and travel does not have to be complicated.”

Daniel’s right. When you start camping as a family, take it slow and keep it local. The mountains are magical, but if you live far away from them, why not start exploring the nature in your own backyard? Better yet, start in your backyard. And for the first camping trip, Daniel suggests preparing the campsite before the family arrives: “Sure it is nice to include everyone in the tent pitching and preparation, but initially it is satisfying enough just to be around the campfire and to sleep in the tent.”

In fact, Daniel says to start with only one night of camping and work up to basecamp tenting for several days: “It’s a good option since you don’t have to take down the campsite and build it back up again. We take them on daily hikes that are no more than three kilometres one way, and you can relax more as a family afterwards if you’re settled in one place.”

Daniel prefers other seasons to summer for camping. Fall for example, is ideal because there are no mosquitos and, “…you have great temperatures for sleeping – with the right equipment – and many times you have the outdoor space to yourself”. 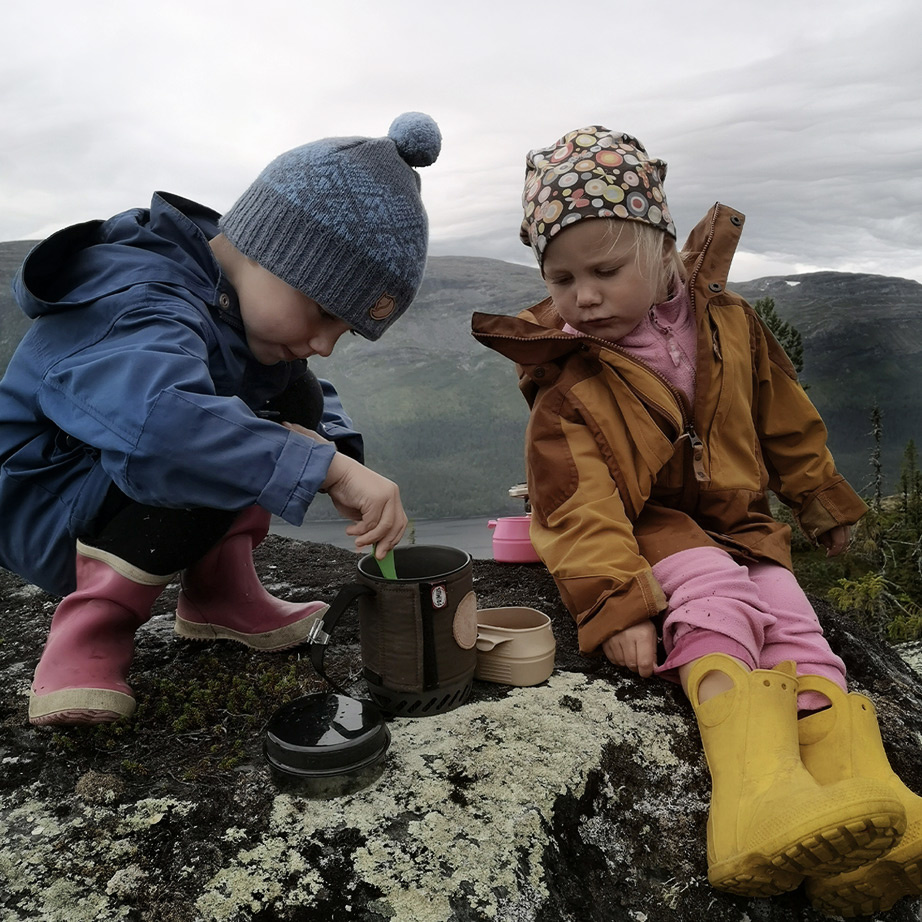 Daniel prefers other seasons to summer for camping. Fall for example, is ideal because there are no mosquitos and, “…you have great temperatures for sleeping – with the right equipment – and many times you have the outdoor space to yourself”.

When camping for the first time with young children, Daniel stresses the importance of planning ahead and using high-quality gear. He even recommends renting or borrowing gear, rather than wasting money on low-quality equipment. The tent in particular is crucial to the experience. Here, Daniel and Sandra rely on the Fjällräven Abisko Endurance 4. 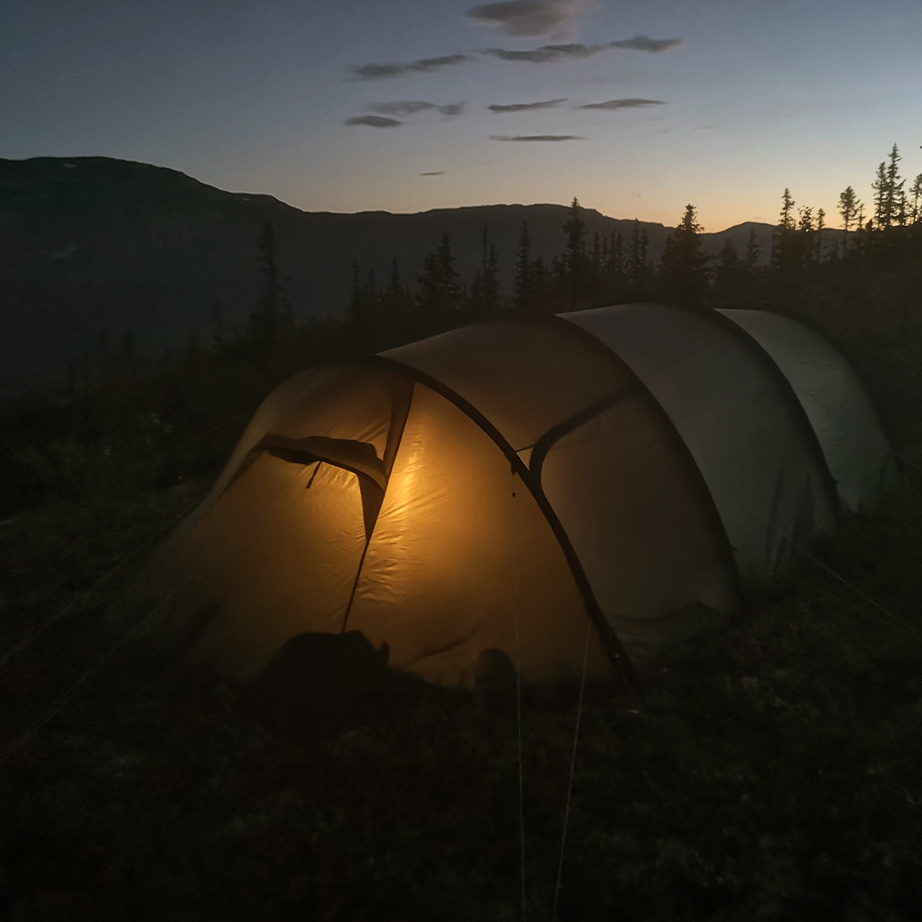 “In my opinion this is the tent of choice for camping with a family of four. I think it is amazing to have the two vestibules; one being very large. It is also very good to have entrances on both sides, as well as a full-height inner tent. The walls are practically vertical, which gives you more active volume and a greater level of comfort.”

Daniel and Sandra’s packing list for a short trip also includes plenty of snacks and good food, because mood and energy rely heavily on everyone being well-fed. A book for the family to read together at night (with headlamps) is also a treat. A good mattress, or even two, as well as inflatable pillows, are vital to everyone being warm and comfortable. They also suggest each family member have two sets of wool underwear; one set packed in a drybag. Finally, a pair of light and comfortable camp shoes are important so wee feet can rest from a long day in hiking boots.

Perhaps the biggest shock of camping with young kids is the equipment increase, which even Daniel admits is daunting: “The gear is a challenge for parents to carry, but there are solutions – and adapting to the circumstances is worth it.”

One adaption: let the kids carry the gear themselves! “In general Alexander and Minna want to carry their own backpacks, so we pack some clothing and other items in their Kånken Minis.” 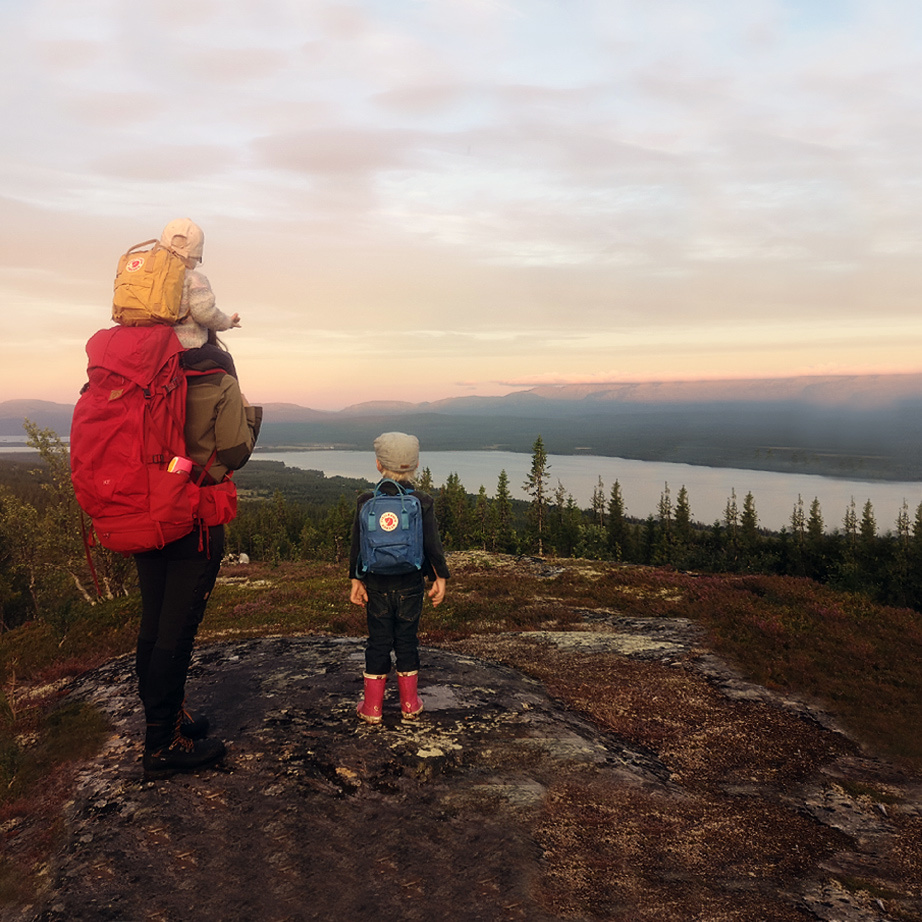 This takes us to Daniel’s next tip:

Get the kids involved.

“Both our kids want to be involved and help out, so we try to include them in the tent set-up and food preparation. Alexander especially loves to try the fire steel, and it is his job to keep track of that item.”

Teaching children early-on what is involved in camping gives them greater appreciation for the activity and the outdoors. Not to mention the effort that adults put into the experience on their behalf.

This also translates into an increased awareness for environmental stewardship. Daniel and Sandra ensure that everyone does their part to clean up their campsite. Whether or not the trash is their own. As he says, “I want the children to understand that us humans are part of a big planetary eco-system that we need to respect and cherish.”

Take time to just be a family.

In a lot of ways, no experience is as wholesome as camping. While day treks and helping set up camp are valuable experiences for young children, Daniel emphasises the importance of just letting kids be kids: 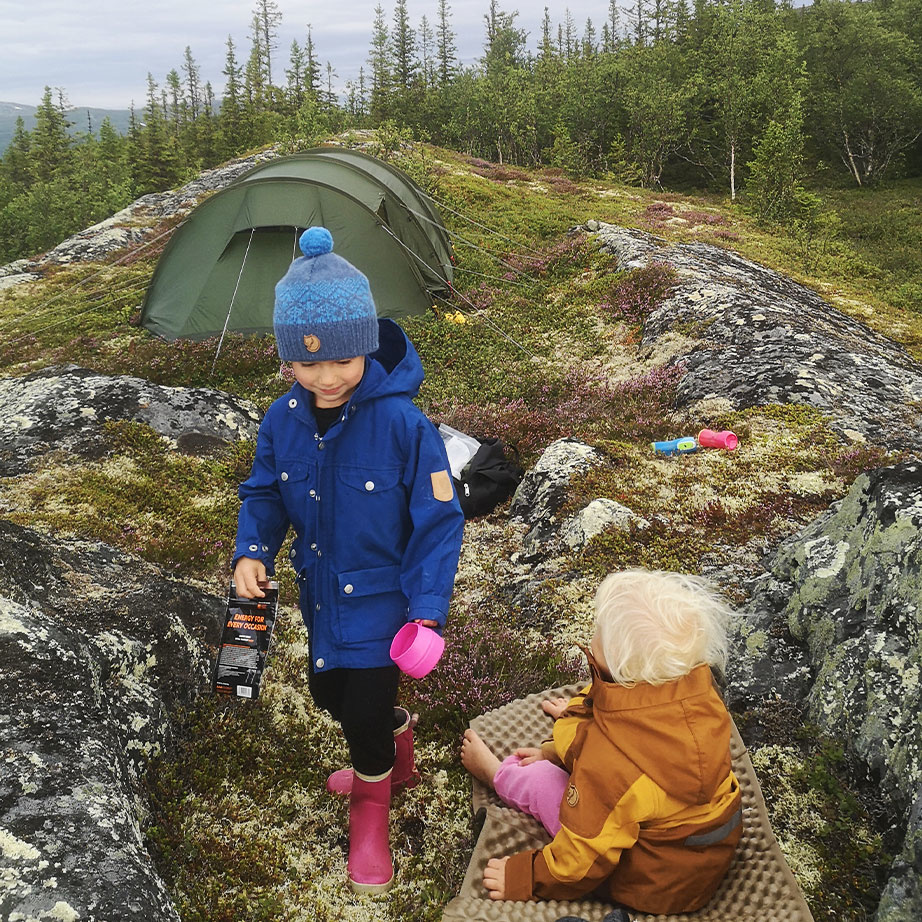 “Giving kids the opportunity to run around and play in the outdoors makes them agile and strong. It makes movement in ‘terrain’ natural. It’s also good for their imaginations to just play with whatever they can find around them.

Then once everything is settled, we can just lay in the tent as a family. Talking, reading, listening to the sounds of nature.”

There is a first time for everything, so if family camping trip number one did not go exactly to plan, do not let that stop you from getting out there again:

“Of course, there are challenges when camping with children, but like everything in life it gets easier and more enjoyable with practice. 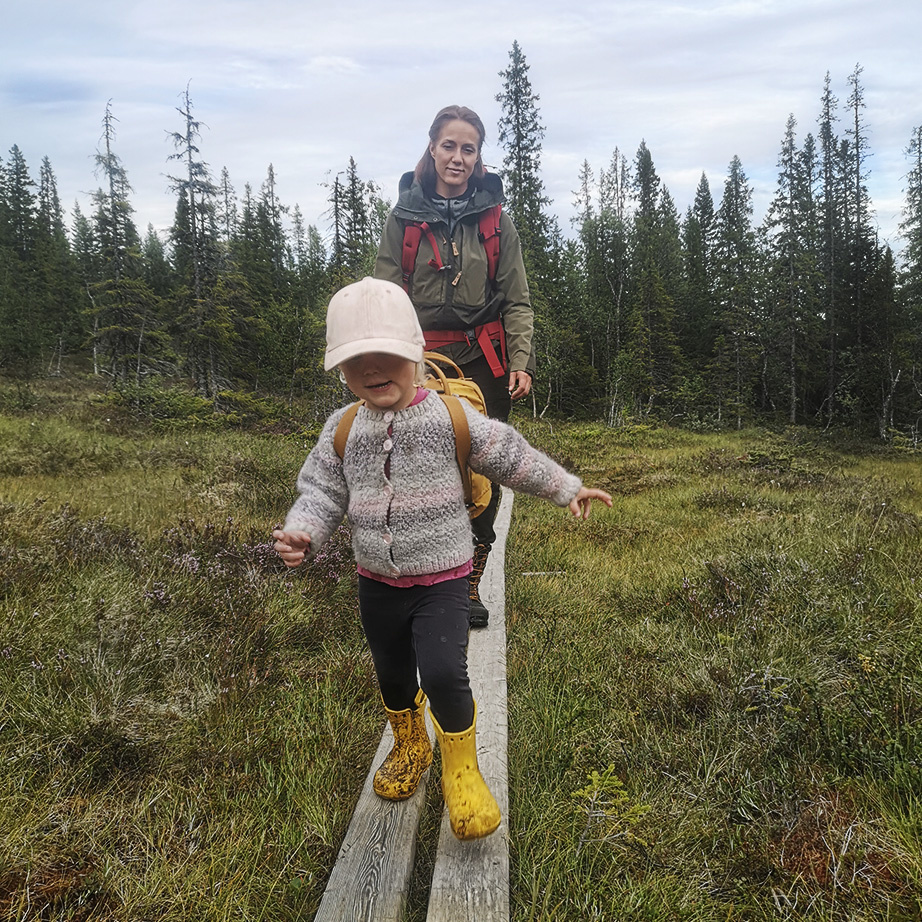 At the same time, it is so nice to just be a family. Away from the disturbances and ‘must-dos’ or everyday life. It’s rewarding to just be present for a while and really be together.” 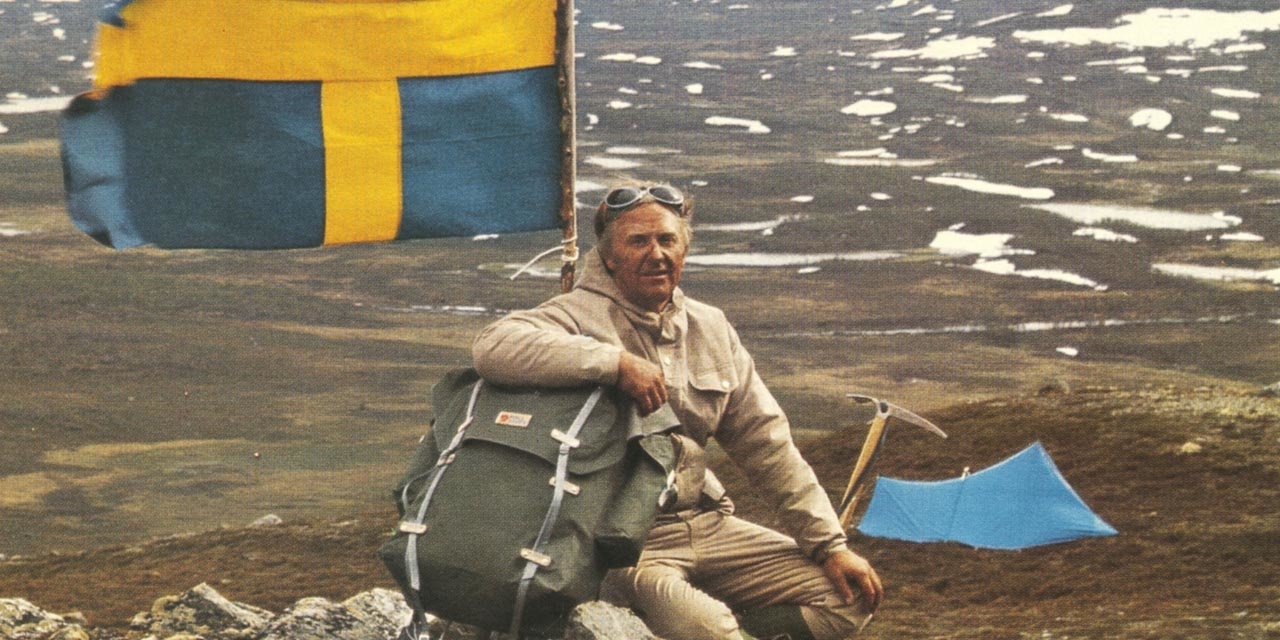 Fjällräven - Where It All Began

Fjällräven was born out of one man’s vision: a vision to make nature accessible to more people....
Read more