Changing your perspective with a good view 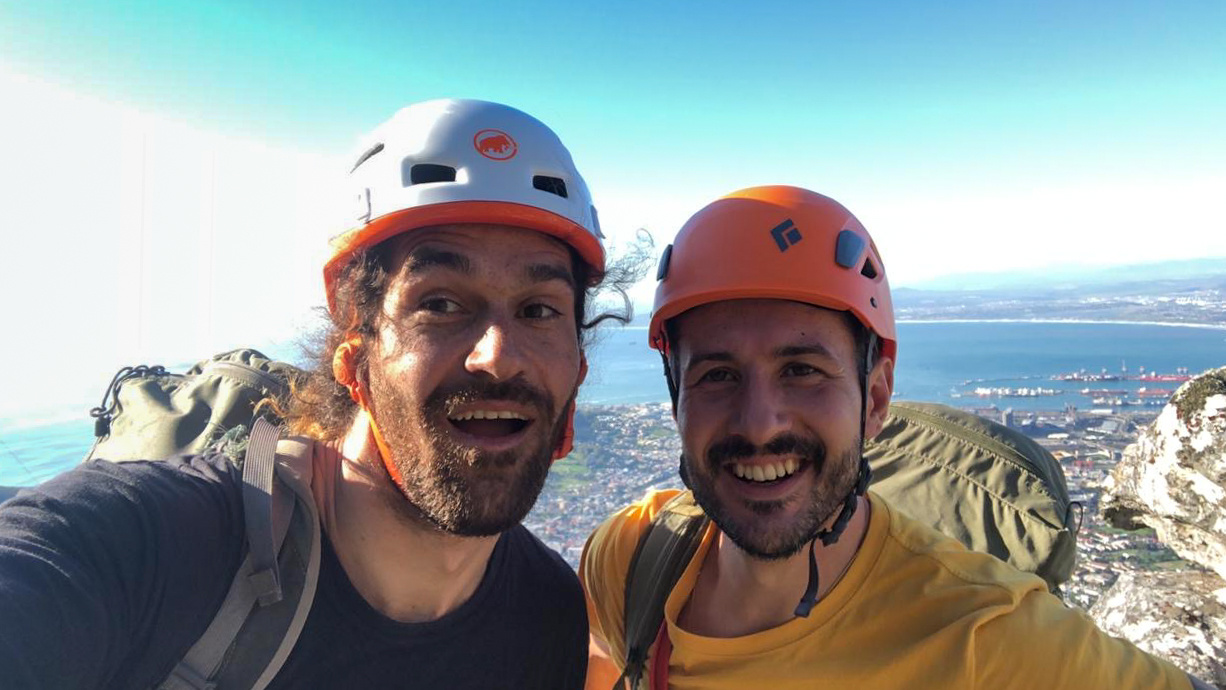 This is not about heights; this is about you taking charge over yourself

With the world sick of the insides of their houses, the outdoors has become extremely popular of late. I have spent a great amount of time enjoying the trails surrounding Cape Town, covering most of the Peninsula thanks to my competitive nature fuelled by Ryan Sandes’ 13 Peaks Challenge and a solid group of equally competitive friends egging each other on to finish gruelling distances and constantly smashing PBs on Strava.

When you spend this much time on the mountain you realise that what might have started as a first date stroll quickly turns into a full-blown relationship. Mother Nature doesn’t want you to change and doesn’t care for excuses; she just wants what is best for you and to show you are capable to cope with whatever life has in store for you. Mother Nature can be unforgiving in her relationship but never fails to teach a lesson. 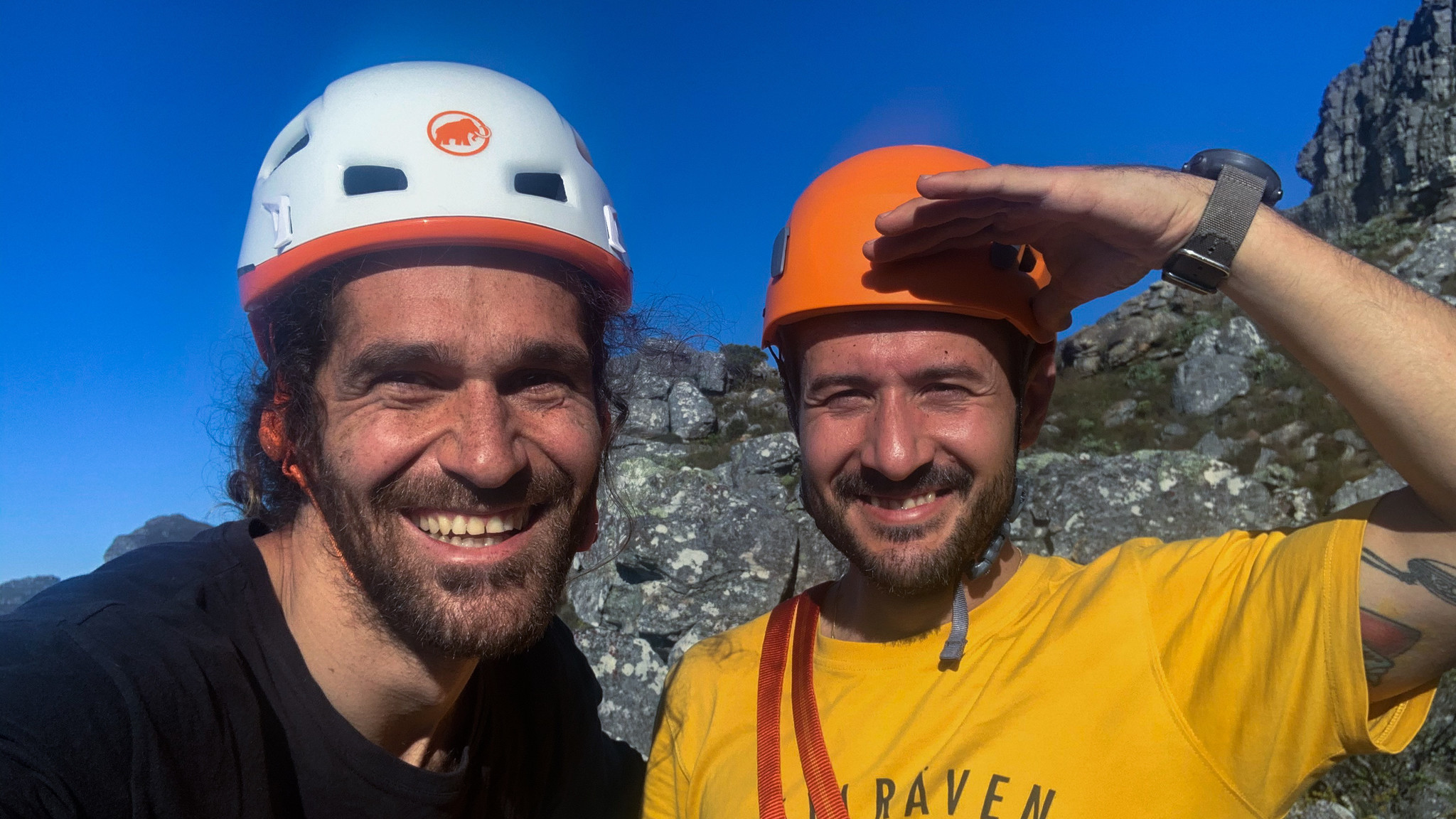 We met under unfortunate circumstances, Jacques and I. We carry a distinct weight every time we see one another, but when we climb, we shed some of it. Perhaps it’s just the adrenaline talking but when he hands me a high five after finishing a pitch, my mind elates. Quickly, climbing has surpassed a sport and become a spiritual retreat.

Jacques probably started climbing the same time that I did, except, he never stopped. He has climbed with the best this country has seen and has recently opened his own route on Paarl Rock – it is one of the craziest things I’ve seen: the rock is shaped like a baseball glove. We are not quite there yet – far from it. My ego has promised me 6 months, but in reality, it’s going to be more like a year or more. 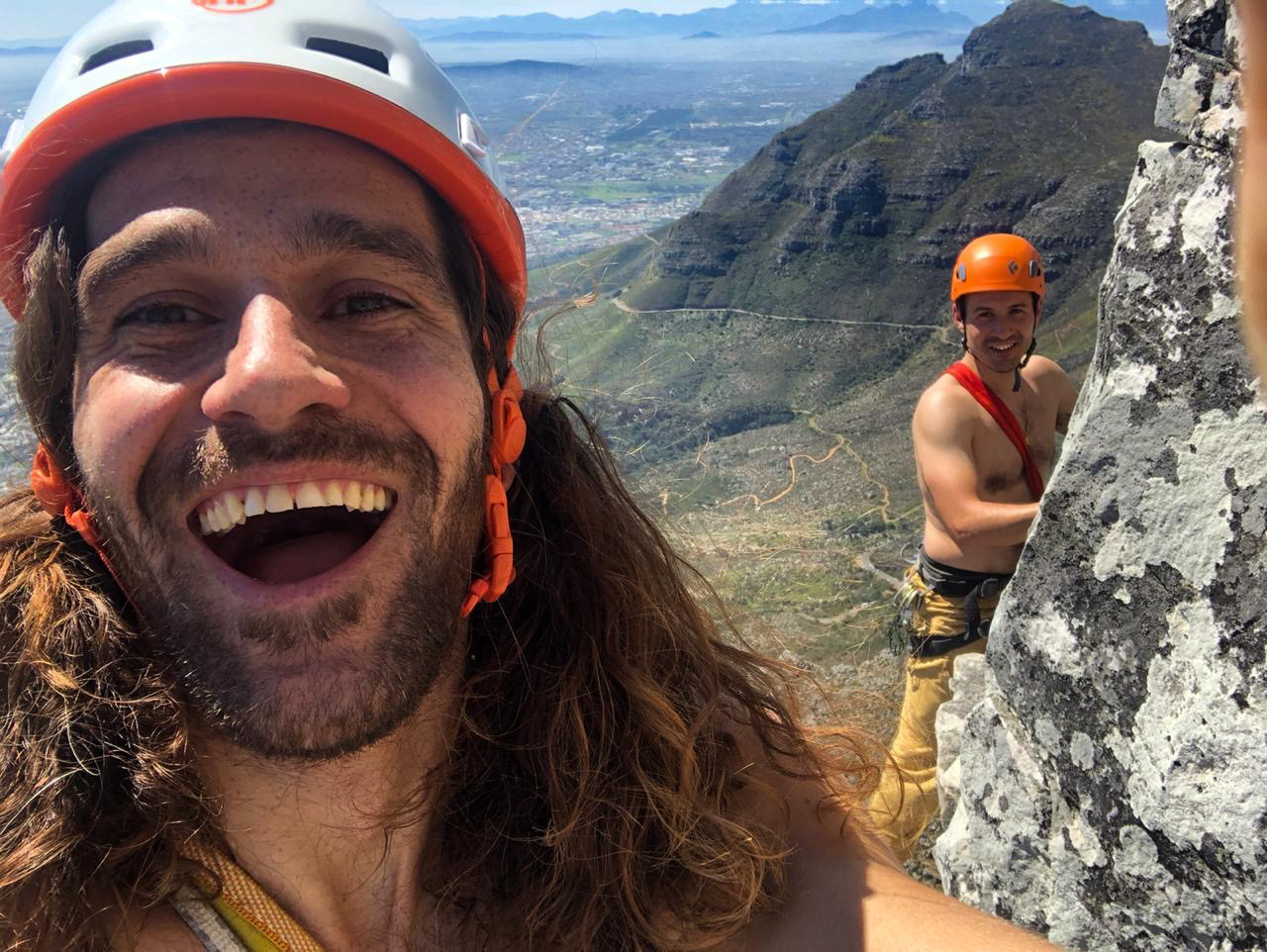 I’d like you to consider a hike with a gradual incline (Class 2) to hiking with the aid of your hands and scramble up a rock surface (Class 3) – think the chains on Lion’s Head or India Venster on Table Mountain. Class 5 is where the transition between hiking and rock climbing happens. This is where you need the gear: harness, rock climbing shoes, chalk bag, climbing rope, slings, nuts and cams (Spring Loaded Camming Devices) which are essential to trad climbing as they are non-intrusive equipment that fits inside of cracks in the rock surface. Once set you can clip in your rope for climbing or yourself for anchoring.

Jacques was up first, obviously. He shows me how to place the cams explaining that the space between the first and the next is directly connected to how you may redeem yourself in case of a fall. I’m on belay and just like that we’re forced to trust one another; literally putting our lives in each other’s hands. We haven’t talked about heights yet but I feel that you know what you’re getting into when you decide rock climbing is something for you.

I watch Jacques as he leads the way up what appears to be a clean wall clear of any grips. He reaches the first ledge and shouts ‘I’m safe’ to which I reply ‘off belay’ and he gives me the go-ahead to take him off belay, a technique used in climbing where you exert tension on a climbing rope so that a falling climber does not fall very far. 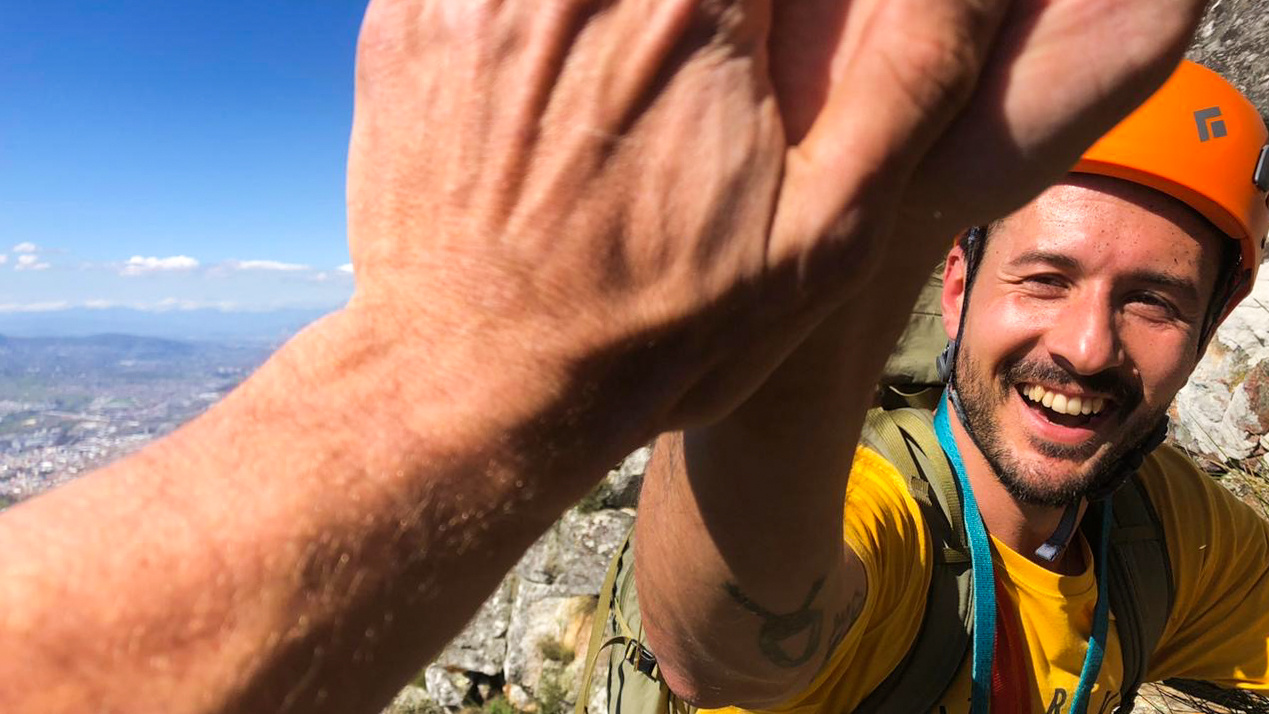 I walked up to the wall with all the courage I could muster. ‘Stay calm’ I said, repeatedly. My mind is particularly clear, a good sign that I am nervous. I start the climb and then the magic happens. All I could keep my mind on was to make the next best choice with every stretch and step, within my reach and comfort. I’m up top with Jacques, the high five thing, I have arrived, I am safe.

On the third or fourth pitch on Arrow Final, I was at the cusp of my comfort. The ledge was half a meter wide and I had to belay Jacques while hooked to a three-anchor point. This is all within the rules and very safe but trying to explain to your brain that everything is ok is not that easy. Primal fear kicks in, but you have no one to be angry with nor afraid of except your deeper self. 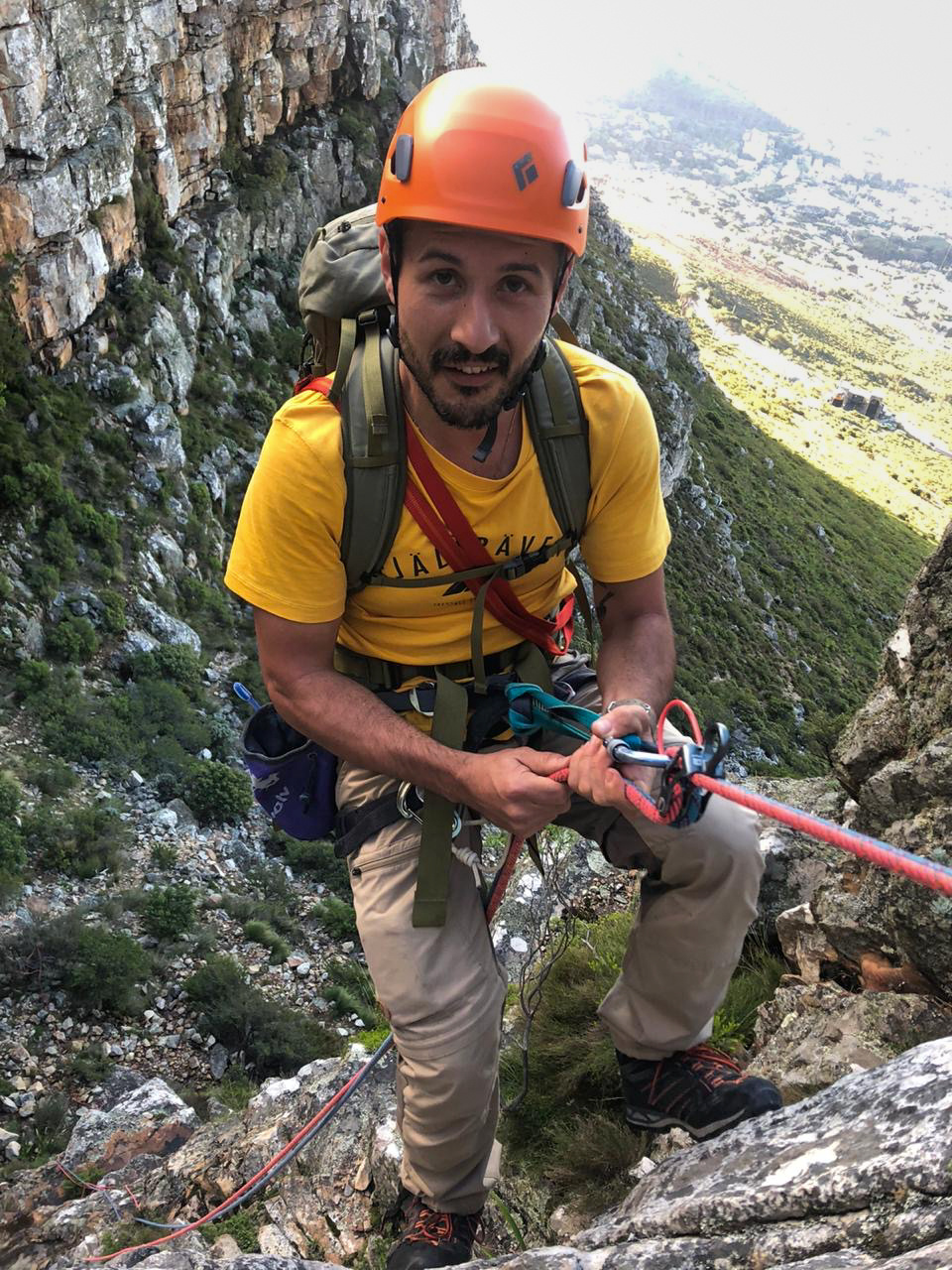 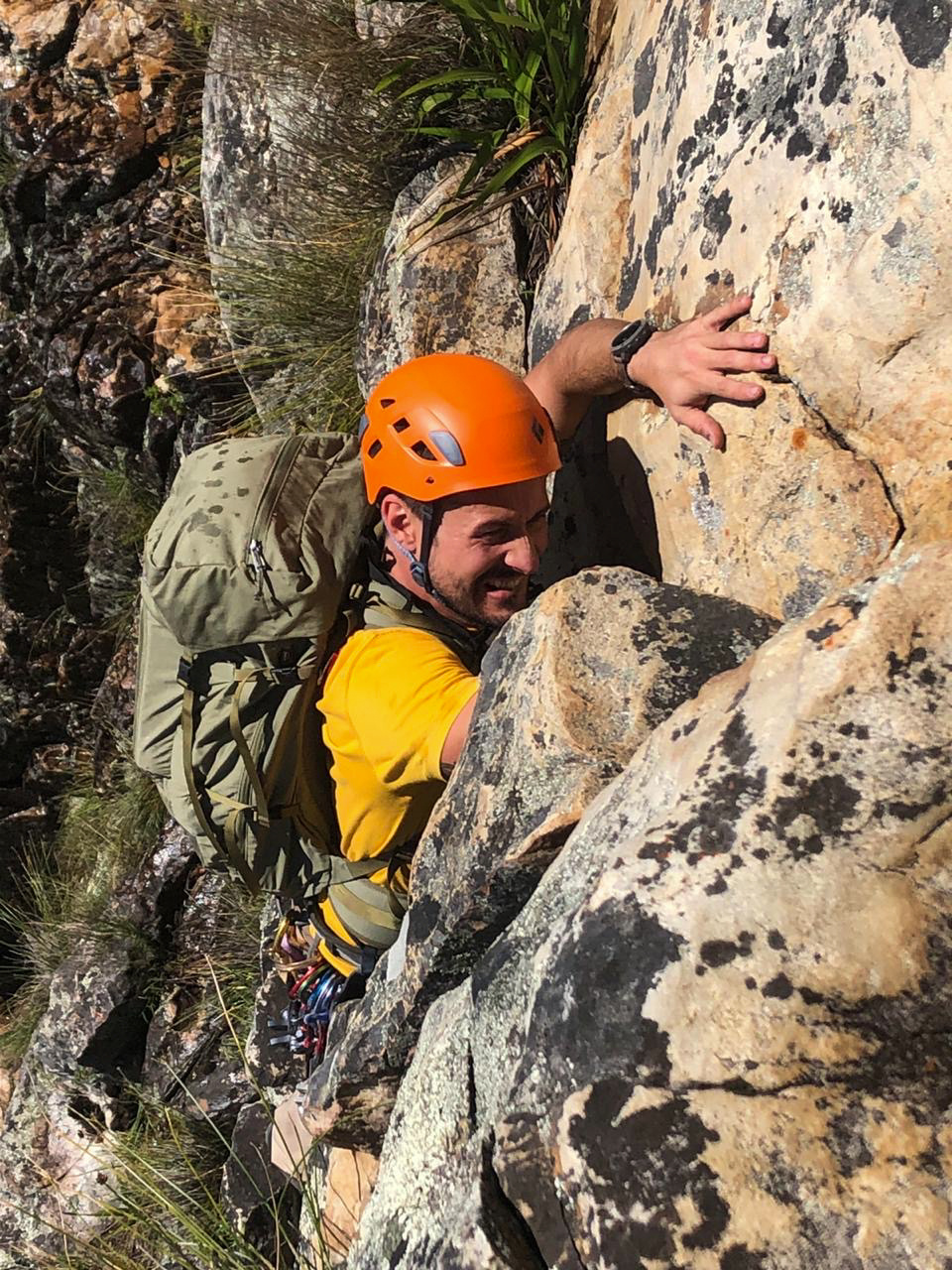 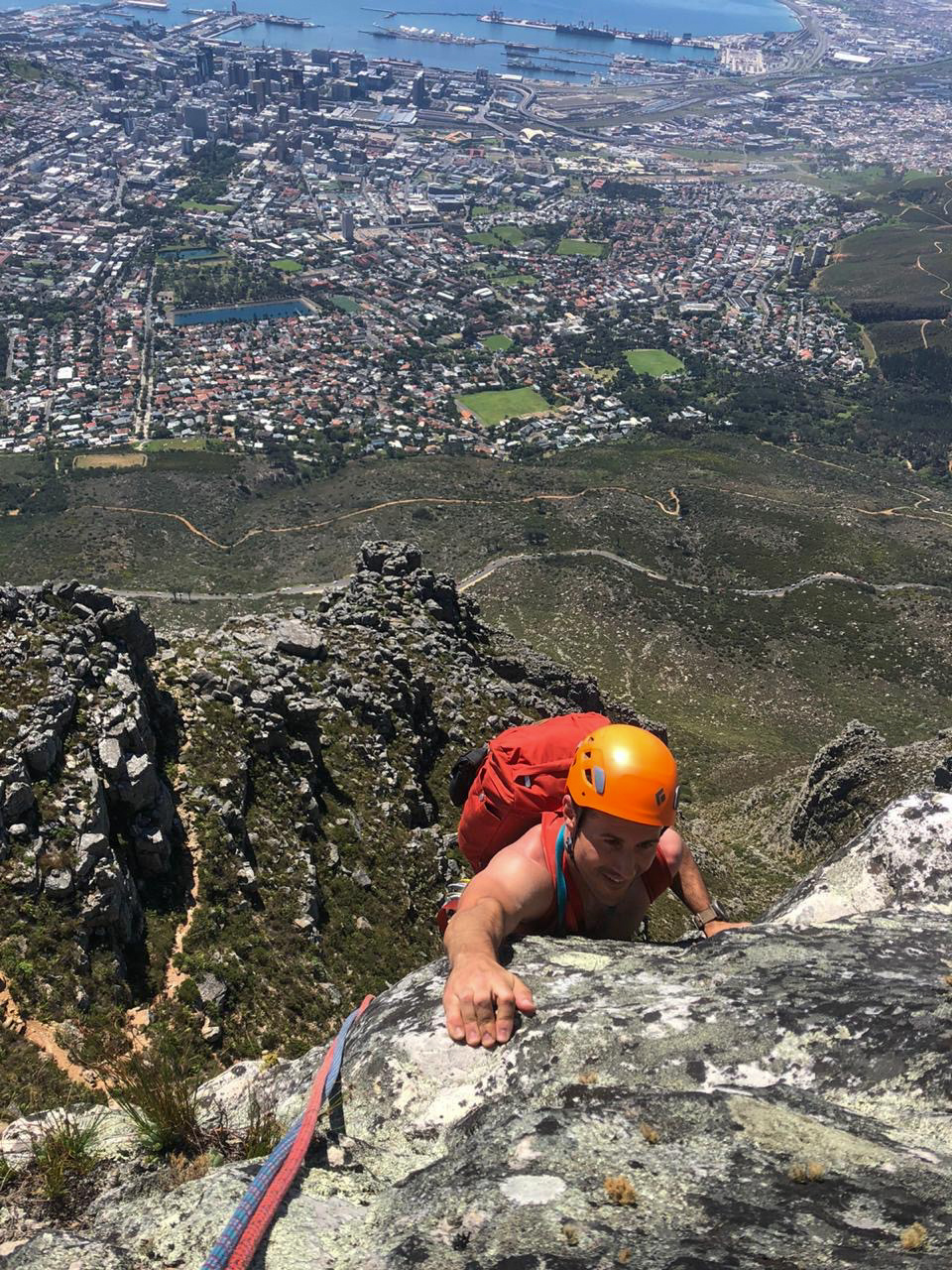 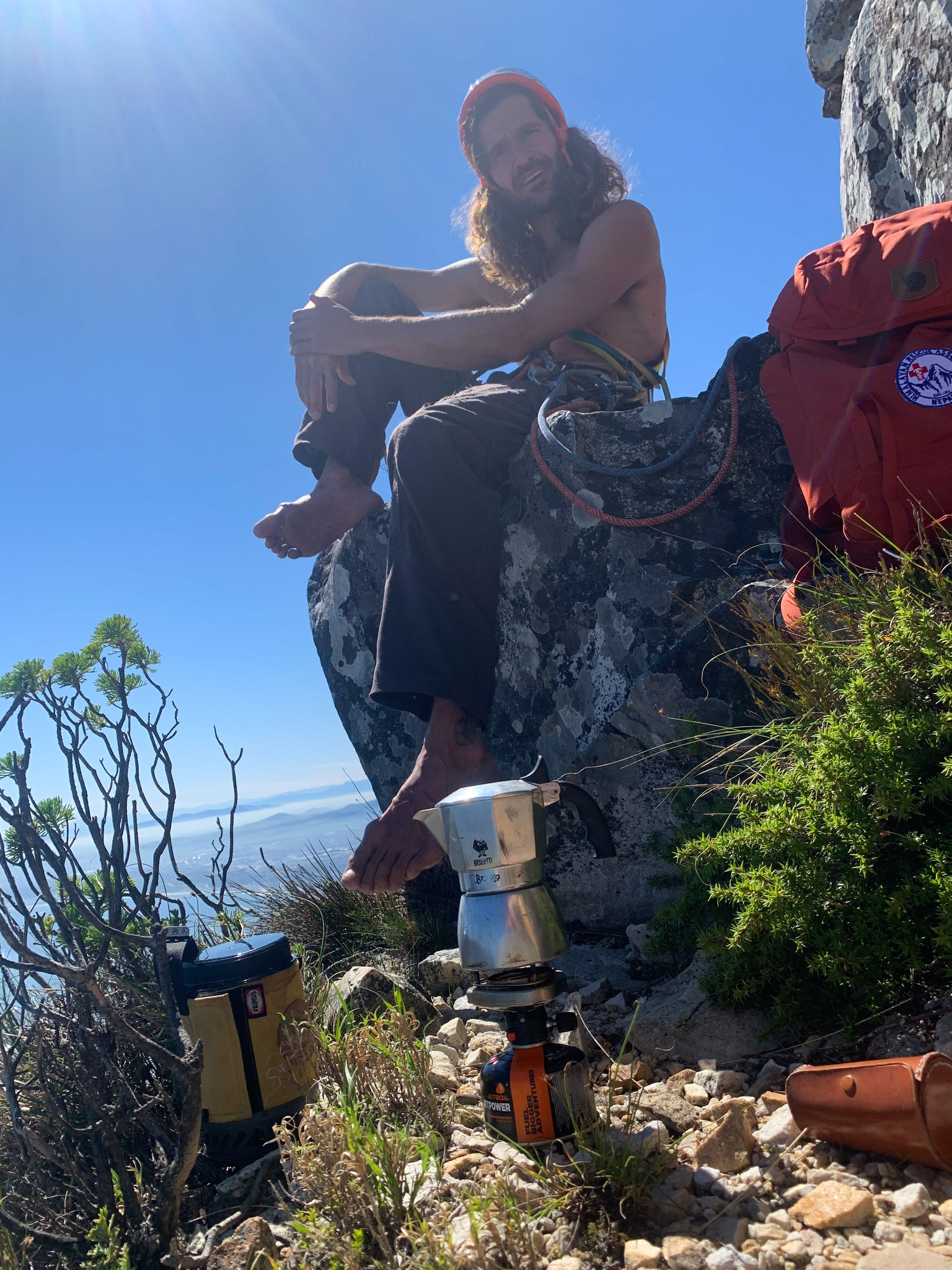 I wondered what the fear was rooted in. I was in a place I’ve never been before both physically and mentally. Nothing came to mind. Blank. Is fear real or is it just a natural mental barrier like the factory speed limiter on supercars? I’m beginning to think so. I barely scratched the surface and I feel like I tossed out a lot of emotional ballast.

So, here is my take on climbing. Don’t take my word for it as I’ve been twice – before that I bouldered lightly and way before that I was hanging by a rope with my grandfather showing me the basics at the age of six. Rock climbing shows you very quickly what your mental limits are and how to overcome them. And not for nothing. When faced with a challenging climb and figuring out the moves, you’re solving problems. 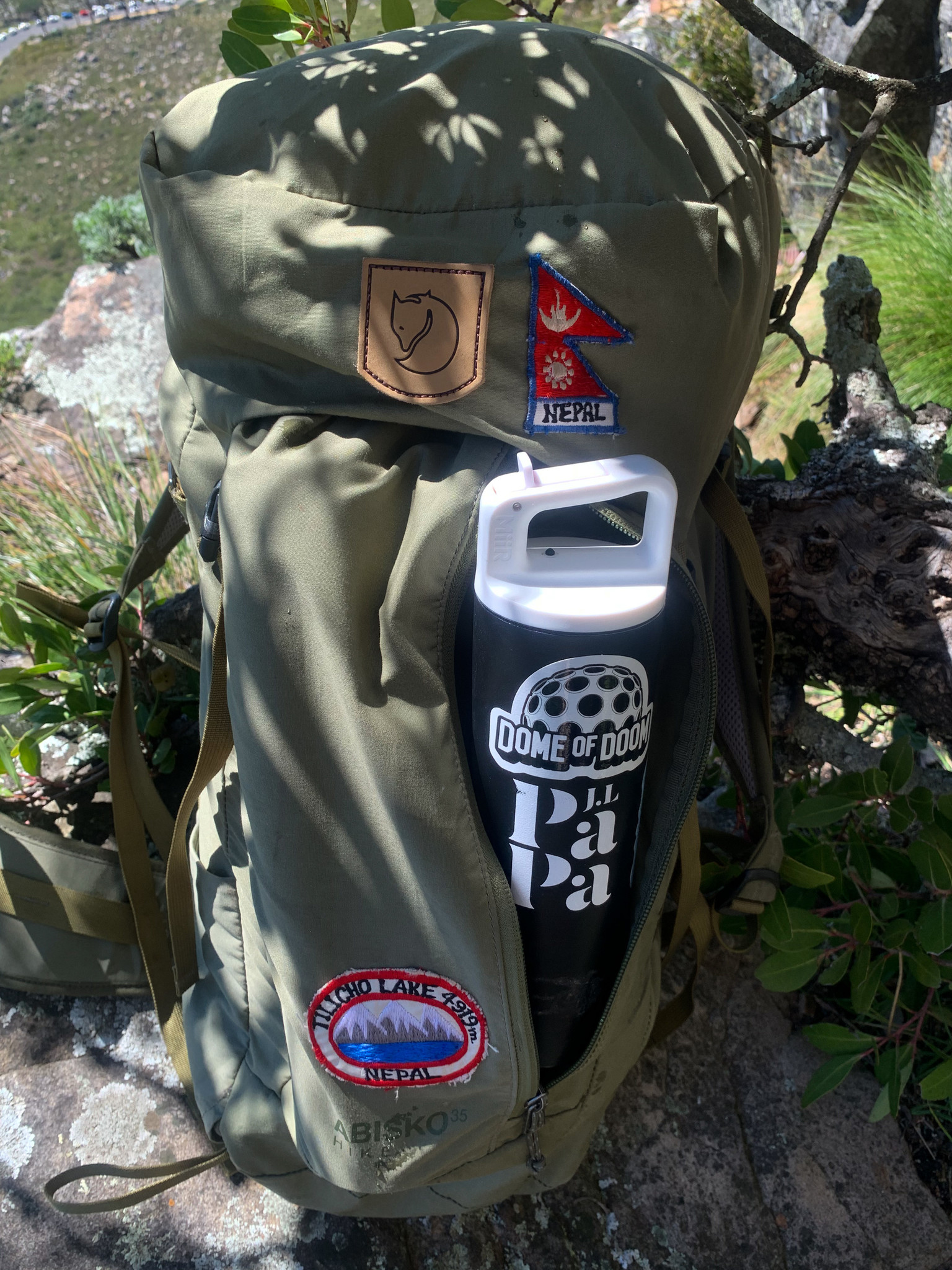 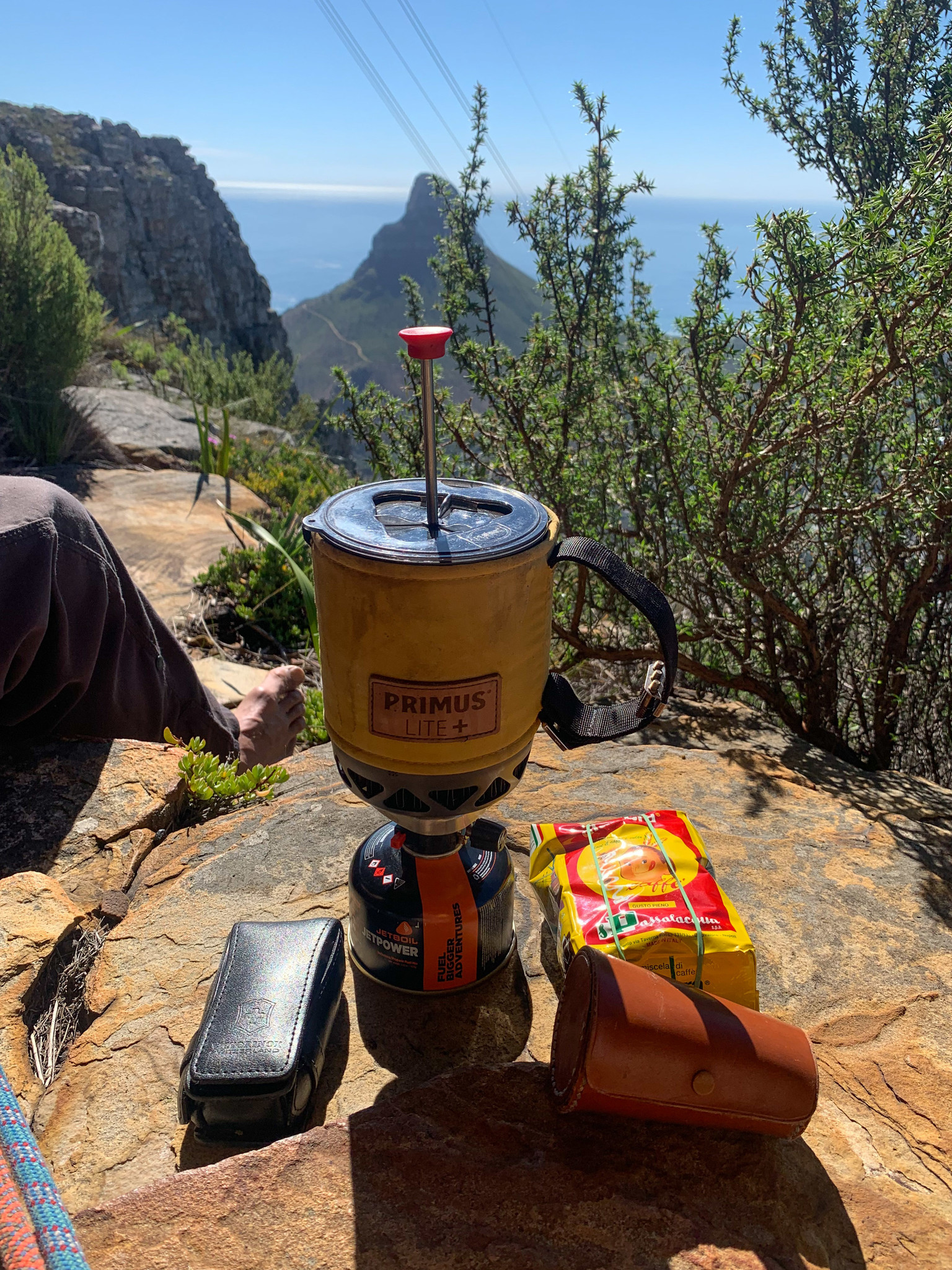 How to find the perfect trekking trousers

Fjällräven knows its trekking trousers. But why are there so many models? The answer is straightforward: we are all different. We have different physiques, our bodies have different needs, and we en...
Read more 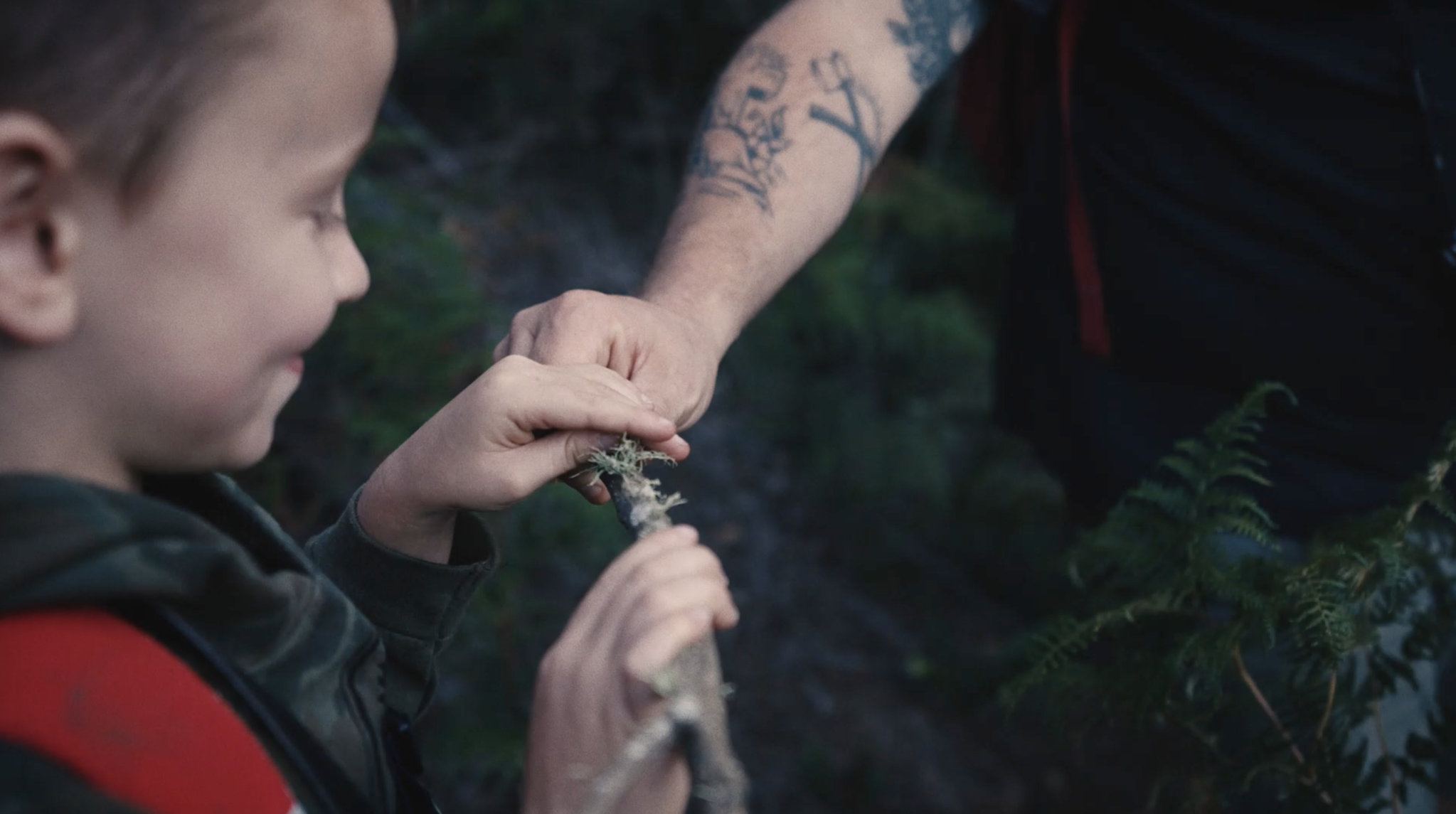 By now you're probably familiar with our partner brand Just Like Papa and the characters who've played a part in their story. Well, we'd like to shine some light on these special people by giving you ...
Read more 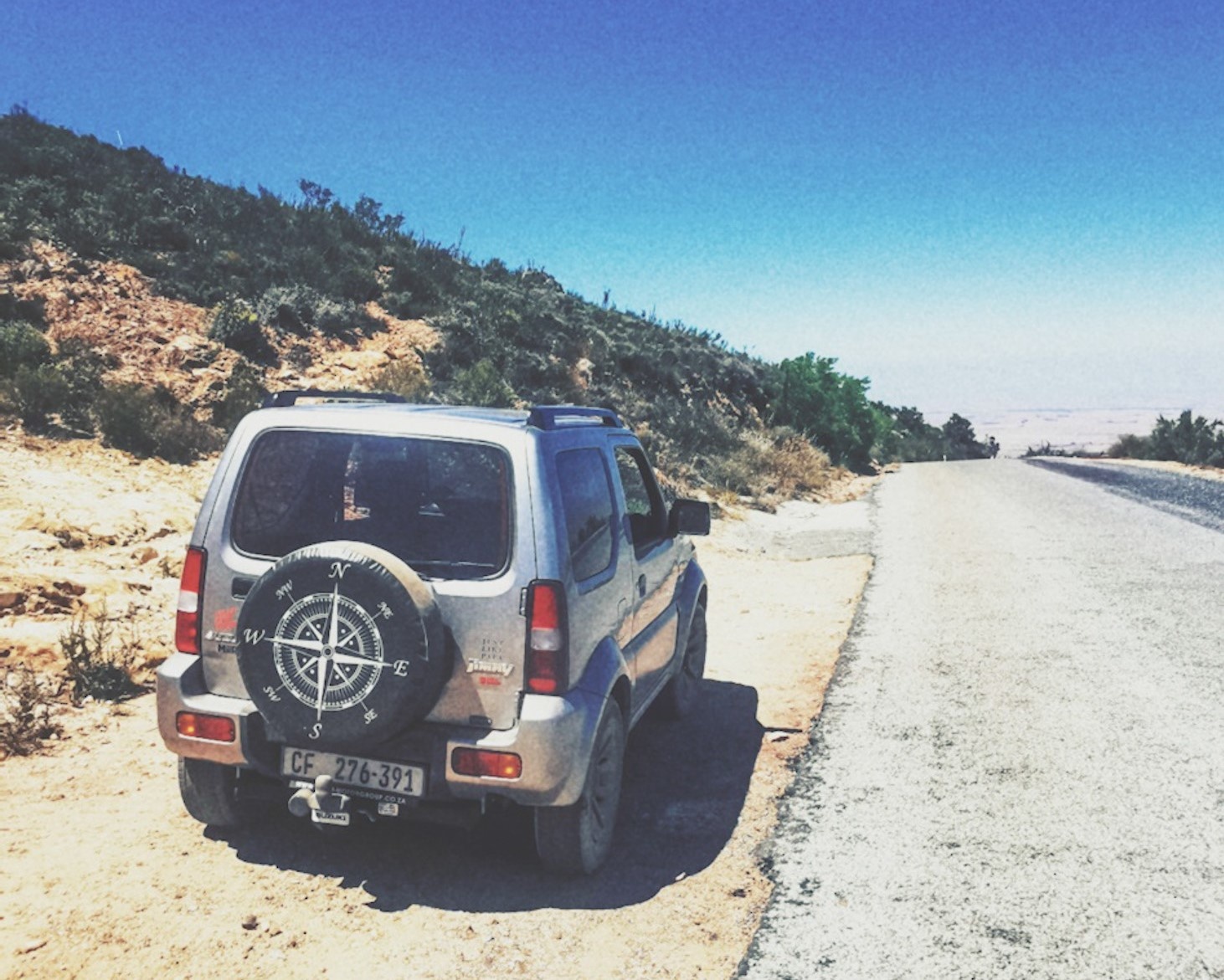 You'd think Beaverlac over new years eve might be a hard pill to swallow. On the contrary, it couldn't have gone down better....
Read more